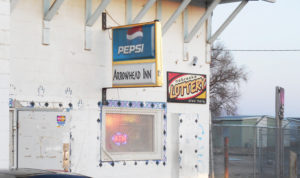 They’re liquor licenses are coming up for vote on Thursday. All of them.

So this white town of four liquor stores and twelve residents, stationed strategically across a state line from our home and families has another chance of being shut down peacefully.

And in this article, The $6.3 Million dollar ransom that is being asked to stop murdering our tribe is definitely another area to pursue. I was surprised that evil this stark would have a pastor. It’s a complicated knot to pray about.

What this picture doesn’t show is the people sleeping it off, laying on the ground. If you kept going to the North in this picture, you could see the water towers of Pine Ridge. They are well kept up and painted. That water system, tribal owned and run, is an award winning system. I know. I’m an engineer who has worked with water for decades. So you can stand on the streets of Whiteclay and look North to Pine Ridge, which in contrast is a shining city on a hill.