I’m a COI (Child of the Interpreters), goes along with the Children of the Interpreters, goes along with every bunch of rugrats who didn’t fit in to one side or the other, by bloodline, looks or pocketbooks. And we belonged to parents who, trying to pass on their wisdom and culture and love, found themselves creating some type of mixed table, admonitions flavored with exceptions, plates and forks from wherever the universe spilled out, and food like Indian tacos and government cheese. Technically, you couldn’t call fry bread traditional. I know, but who cares. 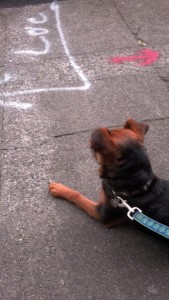 Throw us all in there together. We’ll survive. And the people who believe that there is some kind of purity that needs to be preserved will just have to put up with our loud music, with the comings and goings, with our new ways of doing things.

It’s about not having to worry about being good enough. That’s my old dream.

The things those old gods remind us of, yeah? And new science too. That’s old. Like just figuring things out is something new, right? So here’s my new way: Fuck all the rest of that shit.

We’re all good enough. Now, let’s do that.