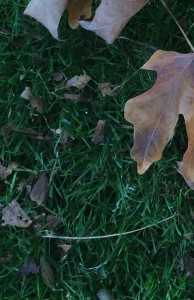 How many days into autumn are we? Seems I started seeing the leaves fall a while ago. Now it’s October. Back when I was falling in love it was before the spring, When the green was starting, but short of the official okay of a date. It wasn’t April 21st then, like it’s not September 21st now. It’s October. We’re past the heat. Then, we were before. Any day I expect to hear the sound of leaf blowers. I think I have a rake in the shop.
Never liked the sound of those blowers. Never liked the harshness of it. At least around my house, things should be done by hand. The leaves that had done their duty should be met with some kind of honor of exertion. Yes, and honestly, I like the feel of the ache in my shoulders as I wade into the effort. I like the feel of the handle in my hands.
These days there’s a good chunk of people who don’t believe in rakes, who don’t believe in love. They’ll point out how it never lasts, how you’re blinded to peoples faults, how childish it is to dream. They’ll say you shouldn’t rely, you shouldn’t give up, you shouldn’t … you shouldn’t. And when the summer comes, they’ll tell you you’re tricked.
Still, you suck up the sun, lay on the beach, open up your arms and let it take you all in. Regardless of what they say, you still do it. It’s because this stodgy goo that is our everyday perception wants to jump. It wants to move and dance and fly, to be away from this sameness, to hunger for the other -and feed.
They’ll say there’s more than one, that it isn’t just the heat of the sun, but the smell of the flowers -just like in the greenhouse – or not the warmth of the day -just like what you can get from the fireplace. They’ll say that to be balanced and healthy you have to enjoy everything.
But more than anything, they’ll say that, once again, you’re wrong. That to be normal and healthy, like everybody else, you have to do what they say. Don’t love.
But These leaves keep falling.
Wrong doesn’t matter. Wrong doesn’t care. Wrong is it’s own kind of glory, like those leaves. They did their duty, with no one telling them it wasn’t worth it. There’s cycles to this. Giving into what you want, letting go of all the should-of-beens, it’s kind of all the same thing. And with each pull of the rake the body remembers.
It’s like those nightmares. Have you ever had those nightmares where you’re falling and there’s nothing there to catch you? The kind where only dying is at the end. And if they last … yeah, I know, crazy. If the terror lasts, right? But if they last, if you let go of the fear and turn in your dreaming eye, … if you can do that, you’ll find
… you’re flying.
And the seasons turn and the wheel creaks. It’s the cycle, it’s the circle of things that we’re made for … not to measure up to someone else’s description of better or best. And the honor and attention that we give to these falling bits of ourselves, and the thrill of the wind tearing it all down in a sudden … all of that required a beginning.
“If you’re brave enough, often enough, you will fall.” – Brene Brown
And the leaves are everywhere.